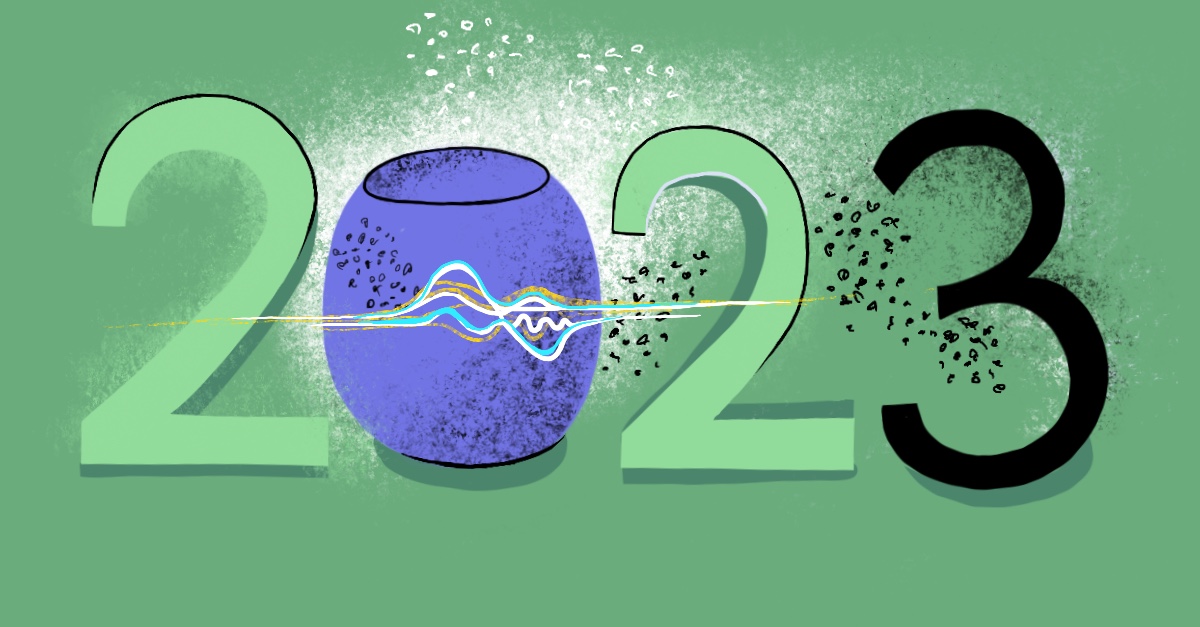 Just like for the rest of us, it’s been a turbulent year for the Conversational AI industry. On one hand, there’s been deep fake anxiety as well as layoffs at Amazon and Meta. On the other hand, we’ve seen digital humans evolve, revolutionary language models released, and new successful automation projects launched across various industries. Here, I’d like to muse on the trends that will dominate the Conversational AI industry in 2023.

According to UiPath’s 2022 trends report, a hybrid human-digital workforce is the new normal we should all prepare for as C-suite executives name automation among top priorities. Indeed, within the next five years, we can expect people and virtual assistants to work together more closely. This year, apart from the growing number of basic chatbot projects we’ve seen many custom industry-specific assistants with advanced functionalities appear.

For example, Wells Fargo released an interactive virtual bank teller named ‘Fargo’, as part of their expansion of financial AI tools. RAIN Technology officially introduced the Ortho voice assistant created to help with vehicle repair. While IBM and the U.S. Patent and Trademark Office announced they were testing a new AI assistant for patents, designed to help inventors avoid potential rejection and test their ideas for novelty.

What’s peculiar is that even those who have been slow in the uptake of AI, have been jumping in on the automation trend. This year, for example, we’ve seen many successful cases in the charity sector. Mencap’s ‘Understand Me’ website chatbot guides users and potential donors through a conversation with Aeren, who was born with a learning disability. WaterAid offered potential donors the chance to chat with a bot impersonating someone who would benefit directly from the charity’s support. The Royal Institute of Navigation launched a chatbot to guide website visitors through their membership opportunities. And we expect more similar projects to emerge next year.

The industry is evolving and one of the reasons behind it is the advances in AI itself. Language models – those that actually make AI intelligent – grow and mature. For example, OpenAI’s 2020 GPT-3(Generative Pre-trained Transformer 3) language model has 175 billion parameters and was trained on 570 gigabytes of text. More recently, Microsoft and Nvidia open-sourced a model dubbed Megatron-Turing Natural Language Generation (MT-NLG), which is among the largest models for reading comprehension and natural language inference developed to date at 530 billion parameters. In August 2022, Meta released Atlas, a new retrieval-augmented language model which outperforms a 540B parameter model by 3% with only 11B parameters and 64 training.

In 2022, language model startups like AI21 Labs secured impressive funding and forged partnerships with the likes of Google, as Cohere, for example. Of course, this has been an ongoing trend, that resulted in extraordinary projects like Rally’s contract writing AI assistant powered by OpenAI’s GPT-3 model, or AI text-to-image generator by Simplified, backed by Stability AI’s Stable Diffusion and OpenAI’s DALL-E. So, we are sure to see more in the coming years.

For the past few years, the general-purpose voice assistant market has been the island of stability in the industry. The leaders were defined and all developments were more or less predictable. But 2022 changed that. It all started with Google sunsetting actions, which means that all Conversational Actions will be removed, and will no longer be available to users and developers after June 13, 2023.

This could have been a chance for other players in the industry to spread their influence, but the year is ending with mass layoffs at Amazon and Meta, along with the news that their Conversational AI projects are being affected by the situation. While nothing is definite yet, there are some disturbing signs. According to Voicebot, among the projects impacted by layoffs are Alexa Auto, Alexa Skills Kit, Alexa Speech, Alexa Guard, Alexa Proactive Experiences, Alexa Routines, Alexa Video, and Alexa Marketing. Meta is reportedly shutting down production of the Portal smart displays, meaning we’re unlikely to see a Meta virtual assistant any time soon.

Some people in the Conversational AI industry already call it the end of an era, we’ll be more careful here and say there will be a new era for general-purpose voice assistants. We’ll need to wait and see what exactly will come out of it.

Whatever the future may hold for the likes of Alexa and Google Assistant, Statista predicts the number of digital voice assistants in use globally will reach 8bn. In the post-pandemic world, as people still search for more sanitary alternatives to engaging with physical objects, the demand for voice-powered interfaces continues to grow. In 2022, we’ve seen many devices and applications add voice features: from a new Buzz Lightyear toy to premium cars, to GitHub’s Copilot AI coding assistant. If this trend continues in the coming years, we can prepare for truly exciting custom virtual assistants and revolutionary voice experiences.

Metaverse trends are still going strong, no matter what you believe. Approximately 25% of people will spend at least one hour a day in the metaverse by 2026, Gartner research shows. Moreover, analysts predict that audiences will engage in social activities and entertainment as well as work and learn in immersive virtual worlds. A global metaverse-ready product or service would be available to 30% of companies by 2026, according to the research firm. The metaverse is clearly the future of technology, based on these numbers.

In 2022, branded metaverse projects made spectacular headlines: Netflix promoted their The Gray Man Film in a Metaverse Maze, Taco Bell hosted a contest for the first metaverse wedding, and Walmart debuted two metaverse worlds in Roblox – you name it. While metaverse may not work for everyone, its potential is clear for retail, entertainment and education industries, so we can expect more interesting developments there.

A more down-to-earth spin on the metaverse trend, fully virtual workspaces enable employees to communicate using avatars or holograms. Analysts say that enterprises will expectedly invest 30% of their growth in metaverse technologies by 2027, and they will “reimagine” the working environment. Metaverses will enable virtual workspaces to support new immersive experiences for employees as they demand more flexible work scenarios. This may sound like a thing of the future, but synthetic media startup D-ID has begun using virtual beings for corporate training and they look shockingly realistic.

In order to survive, existing meeting solutions vendors will need to provide metaverse and virtual workspace technologies. Virtual workspaces deliver the same cost and time savings as videoconferencing, with the added benefits of better engagement, collaboration and connection.

According to Gartner, digital humans are among the top six trends fostering near-term adoption of metaverse technologies. In 2022, virtual human companies and projects made a quantum leap in quality. Soul Machines and IBM Watson teamed up to design a digital human concierge for Dallas Airport. Thanks to AI and synthetic media developer Soul Machines, a digital avatar of professional golfer Jack Nicklaus made a comeback to the virtual golf course. Another online sports event, the first metaverse marathon featured virtual human avatars with wheelchairs and prostheses to match their real-world users. The possibilities are endless, no wonder the digital human avatar market size is projected to reach $527.58 bn in 2030.

However, conversational interfaces are not reduced to voice and text, as people rely on a wide range of signals in communication – from hand gestures to eye movement to body language. So, it’s only natural for people to look for experiences that combine modalities across multiple touchpoints. And the number of projects, catering to this demand is growing. Google Assistant’s recent update on smartphones enables multimodal interaction. NLX, a Conversational AI startup, announced it was bringing multimodal virtual assistants to United Airlines’ customer service. Similarly, SoundHound introduced Dynamic Interaction as a means of applying voice AI technology to businesses.

In case you missed the trend: deep fakes are manipulated media created using artificial intelligence technologies, where an artificial face or voice has been superimposed onto another person’s face or voice, resulting in a highly convincing recording of someone doing or saying something they never did.

And if you thought that Boris Johnson’s deep fake was not entirely convincing, there’s a new study that found our ‘deep fakes’ pose the risk of creating false memories. So, deep fake detection is one of the most promising tech fields in the near future. And there are achievements already: Intel’s new AI can detect deep fakes with 96% accuracy. There are even enthusiasts who try to put deep fakes to good use: from helping people with the inability to create mental images in mind to education.

Of course, ensuring that technology as powerful as AI is used for good, requires consolidated effort from multiple institutions and organisations. On one hand, it has been shown that language models may demonstrate undesirable behaviour, including racial, gender, and religious biases. On the other hand, the importance of explaining ML outputs and how specific data were used will only increase over time. It is important for AI/ML to be ethical and fair so that inequitable decisions can be prevented, which makes this trend important for 2023 and many years beyond.

Sadly, AI ethics still remains one of the most undervalued fields in the industry: we all read the news about Elon Musk firing Twitter’s ‘Ethical AI’ team – they worked on making Twitter’s algorithms more transparent and fair.

The role of an AI ethicist is varied, ranging from analysing AI’s impact on society to developing responsible strategies and policies. They also address issues like algorithms that broadcast hate speech, systems that assign housing and benefits in a disfavored manner, and graphic and violent imagery in addition to mitigating the harm caused by AI. Burnout cases are also increasing among responsible-AI teams. Despite the growing awareness of AI’s risks, the ethics community struggles to gain recognition from its colleagues in AI. Therefore, we need to acknowledge the importance of AI ethicalists more often if we want safer and more transparent AI experiences.